I was born on the 2nd of January, so every year, it’s the day people are going back to work after the Christmas break and tired and depressed after over eating for two weeks and then having to change out of pyjamas and head to the gym.

Because of all the busy times, we always end up celebrating later on in the month. This year, we went to a new Indian restaurant in London, Bombay Bustle with friends.

In their own words:

Bombay Bustle in Mayfair captures the essence of Mumbai, our love of home comforts alongside our rapid pace of life, both existing side by side. The restaurant is a place just as well suited to a leisurely dinner with friends as a quick lunch for one, always inspired by Mumbai’s diverse flavours, and home style cooking

We were amoungst the first to arrive as we had a really early booking, the first thing that surprised us was that our booking for 4 people was only for 1 hour 30 minutes. We haven’t been anywhere with such a short table time previously so we weren’t sure whether we’d feel rushed or not.

The restaurant decor feels just like a Bombay railway, there was some light music in the background and we were seated in a booth which felt just like a sleeper carriage in India, along with the little luggage racks up above us.

We were swiftly approached by our waiter and he gave us the drinks and food menus. As we were celebrating my birthday, we ordered cocktails and some papadoms to get our dinner juices flowing. They all arrived in good time and the popadoms were served in a really quirky little tiffin box which added an element of fun to the presentation.

To start we ordered a few bits and pieces, I had my eye on the duck Chettinand dosa and the goat keema pau since we’d booked the table a week or so beforehand so we ordered those two plus lamb chops, chicken wings and a samosa papdi chaat. I also really wanted to try the fish and chip starter, but when I asked if the chef was able to remove the skin for me I was told they weren’t able to.

All the food came out in good time. My favourite dish was the duck Chettinand dosa, the crunchy dosas were filled with tender spicy duck and masala, served with chutneys, they were the perfect way to start our meal. The goat keema came a close second with it’s rich flavours and creamy texture.

Main course, we went for a couple of dishes to share, Dum Nalli Biriyani and a Bohri Chicken Curry. We also got some naan bread, EmJay requested a truffle naan, which is available on the starter menu with a scrambled egg, as delicious as it was, we were disappointed that we had to pay for the entire dish (Masala Akuri) instead of just a subsidary to a regular naan. The biriyani, was tasty, but certainly didn’t tantalize our taste buds like other dum biriyanis we’ve had. The curry was delicately spiced and had a lovely creamy texture with tender chicken, it was spiced in a way I hadn’t had chicken before, and it was definitely something I’d like to recreate. 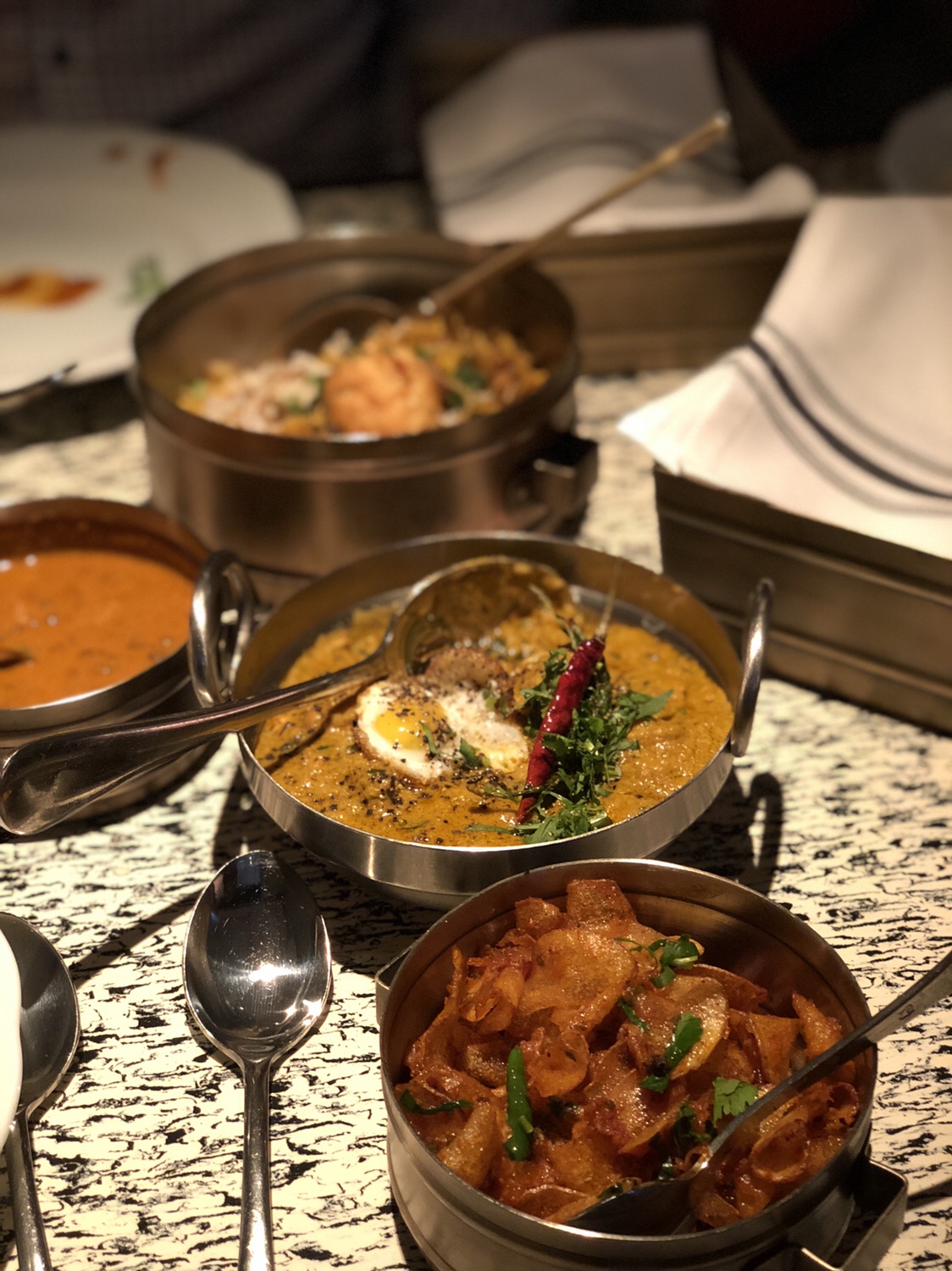 Once our main courses were finished, our waiter advised that for desserts, they would relocate us to their dessert bar downstairs; we guessed this was because the table was on a 1 hour 30 minute limit, so they needed to move us relatively quickly once this time was over.

We followed the waiter downstairs to a great area around the dessert station. This has the potential to be absolutely brilliant. The only problem is, once seated, we can’t actually see what the chefs are doing as the glass is frosted.

For dessert, our friends had kindly gone to the Hummingbird Bakery and bought us a cupcake each which was served to us by the chefs. Following this we took a look at the dessert menu and EmJay and myself ordered the Chocolate Samosa dessert to share. I was really looking forward to this, samosas are one of my absolute favourite snacks, so to have one filled with ooey gooey chocolate would be the dream. Sadly, it was pretty underwhelming. The chocolate wasn’t ooey gooey, infact it was a little grainy, so much so we both took a bite and stopped eating.  While we were eating it, the chef was plating up the jalebi dessert, this looked more like the kind of thing we wanted to eat so we requested a taste. The chef kindly gave us a little sample, this was really interesting, cheesecake with hints of cardamom and spices, with pieces of crunchy jalebi and a saffron caviar. We also tried the masala chai, it was lovely and spiced heavily with ginger which is just how I like it.

Overall, our experience was a positive one. The staff was friendly and attentive, the cocktails were great and the food was really tasty.  We did however begin to feel a little rushed while we were eating our desserts which was a little disappointing. I’m sure it’s the kind of place we would want to visit again if the menu was to change, we felt like we tried all the things we wanted to, so we probably won’t be going back in a hurry as it’s on the more expensive side of a ‘Let’s just go to dinner’ evening.

This site uses Akismet to reduce spam. Learn how your comment data is processed.